So I have been hearing about upcycling, rather than recycling.  Upcycling is putting an about to be discarded article to a different use, like melding metal scraps into a chair.

I was on the subway, studying the human condition, and I saw this awesome display of upcycling:  a men’s blazer re-worked at a satchel!! 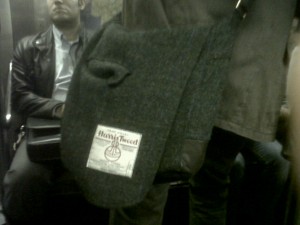 (I took it with my blackberry camera so the resolution is not so great.)

What a relief to know that upcycling has nothing to do with a spin class at the gym.

How do you get someone’s mind off a headache? A strong punch to the stomach.

How do you take someone’s mind off the environmental disaster caused by the massive oil leak? Detonate a nuclear warhead.

Really? Detonate a nuclear bomb to melt the ocean floor onto itself to stop the leak?  It is ok to try new things, like shooting debris in the hole to plug it, because what’s a little more pollution when millions of barrels of oil are gushing into the ocean each day. But a nuclear bomb? Yeah, let’s compound one threat to our future with an almost certain apocalyptic coda.

Someone said this nuclear fix is safe.  Someone also said deep water drilling is safe.  Someone said the Russians exploded nuclear bombs to stop pipeline leaks, but they never did it with oil, underwater and one mile down.  Oh, yeah, just like top kill was never tried underwater and one mile down.  Gee, I wish Anyone thought through how to fix something, let’s say an oil pipe, that far down below sea level before the accident.  Boy, I never met this Someone or Anyone, but Someone sure is crazy and Anyone should be fired.

But, this is America, where Ginger Rogers did everything Fred Astaire did, but backwards and in heels.  So, if we look at everything ass backwards and upside down, it should work.  From that perspective, the nuclear option looks like a plan.  How about if all of the BP executives and the government officials who oversaw deep-water drilling put on some of Ginger’s old outfits and then tried to figure out what to do?  No, it wouldn’t add any brain cells (so still a zero sum game) but it would sure provide needed comic relief in the aftermath of the biggest threat to the safety of all living beings since the Ice Age.

Of course, no disaster is complete without the accompanying political grandstanding and fiascoes.  Louisiana Governor Bobby Jindal wrote to the President enumerating the number of jobs that will be lost because of the moratorium on off-shore drilling, even as he decries the despoliation of his state’s shorelines and criticizes the administration’s slow response.

Maureen Dowd, who is becoming pathetic, says we got the President we voted for, as if that is a bad thing —  a clear-headed leader who doesn’t lead by his gut.  The President constantly overestimates our intelligence and ability to understand the important things.  And President Obama has to stop what he is doing to go on Larry King so that we are reassured he can feel our pain.  Because we need him to hug us and feel our pain while he is protecting us from our own stupidity.

We deserve to choke on the oil slick.

But we need to pigeon hole this one for the 24 hour news re-cycle.  Hmmm.  Hurricane Katrina.  Yeah, that’s it!  Let’s exploit another episode of human suffering for the sake of ratings.  That’s why the media asks, “Is this Obama’s Hurricane Katrina?”.  Because that was the most recent large scale disaster.  We can’t remember back almost 10 years to ask if this is “Obama’s 9/11”.

And it feeds our need, in a situation out of control, for symmetry with past events so we can pretend to understand the event and its ramifications and then go back to watching Britney Spears.   The pathology of fear symmetry.

Let’s not make this about President Obama, although it would make it easier if it were.  It is about greed and reckless indifference to our earth.  It is about a problem of unimaginable scope causing imponderable calamity for all living beings.

We elected President Obama because he is unflappable, at least in public.   Now, we are pissed because he doesn’t express constant outrage to satisfy CNN, FOX, and MSNBC and our own fear symmetry pathology.

Rule 1 of disaster reaction:  If the only people with the machinery to solve the problem are the ones who caused the problem, don’t piss them off.  If you make it so they can never get out from under the liability, they will take their marbles and go home and then all is lost.   Sometimes it feels good to yell at a given moment, but it hurts you in the long run (ever hear the old saw, “don’t cut off your nose to spite your face”?).

Rule 2 of disaster reaction:  There is no easy resolution to this problem because no one prepared for this disaster.  Not BP and not the United States.  Preparation would have required years of research and development by top scientists and hundreds of millions of dollars.  So, blame Reagan, Bush I, Clinton and Bush II.  Even throw Carter, Ford and Nixon under that bus while you’re at it.

Rule 3 of disaster reaction:  Everyone wastes time pointing figures at others.  And take out the mirror.  All of us.  We are the problem, too.  Consume too much?  Vote for the Drill, Baby, Drill ticket?

Rule 4 of disaster reaction: DON’T TELL THE PUBLIC THE TRUTH.  WE CANNOT HANDLE THE TRUTH (Jack Nicholson was right in “A Few Good Men”).  We also expect that everything will get fixed for us, preferably within a day’s trading session at the New York Stock Exchange.

Rule 5 of disaster reaction: The media feeds our ridiculous expectations and our hubris.  So, Anderson Cooper, Glenn Beck, Bill O’Reilly, Keith Olbermann, Maureen Dowd, Jack Cafferty, Wolf Blitzer and whoever else:  stop with the comparisons and come up with ways to heal our earth, ways to help our fellow Americans, our wildlife, etc.  Set up a disaster relief fund.

Reality No. 1 of Disasters:  The man in charge — President Obama — wanted this gusher plugged the minute it happened.  You think he wants to go down as the president who screwed up this disaster response?

Reality No. 2 of Disasters: Everyone is an armchair quarterback.  If you can help, then help.  If you can’t, then shut up.

Reality No. 3 of Disasters: If there weren’t a disaster, the media would create one. So, for the 45th President of the United States of America, what will be your Gulf Oil Spill Disaster?

This Blogger’s No. 1 Fear: If it is ever over, we will forget about it in a New York minute.

Wait, I thought the ad campaign for the Amazon Kindle was “think green, buy e-books”??  Now Amazon is going to print e-books in paperback?  Then why do you need e-books again?

There is something so odd, almost reverse-Darwinian about this. As if Thomas Edison decided that candles and oil lamps were better than light bulbs.  And printing paperbacks is SOOOOOOOOOOO ungreen, especially if publishers have unsold hardcover or paperback copies stacked in warehouses.  Don’t kill more trees.

Some of technology’s best-known companies are betting there’s pent-up demand for on-demand books.

Hewlett-Packard Co., the world’s top seller of personal computers and printers, is teaming up with online retailer Amazon.com Inc. to join Internet search leader Google Inc. as the latest entrants in the quirky new market of re-creating digital books as paperbacks.

The concept represents a different type of book recycling, as digital copies created from print get a second life as paperbacks.