After a summer of day camp, SOS’s last week at camp was sleep-away.

He was adorable in his red baseball hat and red shirt (that was his color-war team) and his blue shorts.  Our little boy sleeping away from us.  We kissed him good-bye on Monday morning, in the house, because we simply couldn’t in front of his friends.

Sidebar:  I learned the “no-kissing” rule on the prior Tuesday, when I walked him to the bus pick-up and SOS turned to me as we were in the middle of 110th Street, “E-Mom, you can leave me here.”  “DUDE, I am not leaving you in the middle of a busy two-way street!!!” As he was harrruumphing, I walked him to the sidewalk, said hi to his counselor and waved to him as he was off with the other campers.

Our hearts’ heaviness at his being away was, however, immediately lifted by the sheer elation of being untethered to a child’s schedule and needs.  Recall that when you have children under 12, parents can’t spontaneously go for a romantic walk (ok, not so romantic in the sweltering heat of New York City) without having planned for a babysitter.  Which then defeats the spontaneity.

The camp has a website where parents can email children and see pictures of the days’ activities.  We saw SOS in that same cute outfit day after day after day.  While we later learned that he showered and changed his underwear, he still thought it was ok to put on the same muddy clothes each morning.

He is a boy and this is camp.  There is hope:  he changed his clothes for the Thursday night dance with the girls.

Gee, I cannot wait for adolescence.

POB recounted this vignette to me after SOS was asleep.  It makes me realize that while being at home is harder work, it is also a lot more fun and challenging.  (The COB can take credit for this insight.)

POB picked up SOS at the bus stop after day camp. They amiably walked the few blocks to our apartment building.  When the elevator came, a skinny teenage boy with acne and long hair emerged.  [I never described boys like this until I was a mother of one.]

The elevator had a smell that SOS could not identify.  It was, however, immediately obvious to POB.  And I am not talking body odor.

“Mommy, what is that smell?”  A teachable moment arrives.

“Sweetie, that is the smell of pot.”

“Huh?”  [Ok, this parenting thing is getting harder.]  “It smells awful.”  The elevator opened to our floor.

“Sweetie, it is the smell of drugs.  That boy was smoking marijuana, a type of which is commonly known as skunk weed.”  [I taught POB that.]

“Don’t worry, Sweetie, nothing bad is going to happen on that short elevator ride.”

Worry over.  Moment forgotten. Back to play and carefree late afternoons after camp.

A missed teachable moment about that urban legend, “contact high,” to keep our son even farther away from smoking dope.  I hope he reads this blog entry when he is 15 years old and using cheesy aftershave and chewing gum to try to cover his tracks as he squeaks in just under curfew while I am pacing in the foyer.

SOS climbed into our bed after breakfast.  I was the only one in pajamas, because POB and SOS had been up for a while doing all the usual morning routines for a day at camp.  I love this time in the morning.  My family lets me be lazy until 7:30am.  POB learned very early on — at Camp Wingate — that trying to make me a go-getter in the morning was a losing battle.

Today, SOS wanted to talk about his momentous birthday and think ahead about the next decade of his life.

“Will I change as much as I did in this last decade?”

“Well,” I said, “physically, probably not — you were a scrawny newborn — but emotionally, intellectually and philosophically?  Absolutely!”

He was quiet.  I had to remember that he is only 10 years old.

“But I will always be your baby.  But not in public anymore.”

Oh, the dreaded “not in public anymore”.  I knew it happened after boys hit the “double-digits” (i.e., 10 and over), but on the day that he turned 10?  Was that soooooo necessary?

SOS had his birthday party before the school year ended, so all his friends could come.  His actual birthday is therefore more low-key.  He wanted a hamburger and fries and some Star Wars action figures.  Easy enough.

We went to the “burger joint” and while we were waiting for his order, he posted: 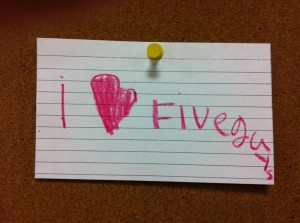 So, not a good parenting day as far as SOS’s nutritional intake.  But french fries are good for the soul.

On the way back, he took my hand and said,

“I know that I am pretty spoiled, but that is what parents are supposed to do.”

“Sweetie, a parent spoils best when she spoils a child with love.”

“Absolutely, that is number 1, but the toys do come in a really close second.”

I give him a look.  That awesome “Mom look” that immediately establishes control over your child’s life.

Over dinner (we took the grease extravaganza to go), SOS asked, “E-Mom, remember when you said that Dubai was becoming more of a tourist attraction than an oil producer or distributor?”

“I don’t remember telling you that.  We did discuss that Dubai’s leadership has built the tallest building and various (sinking) islands just off its shore.”

“Oh, yes, I remember: I read it in the Economist.”

Time to fasten my seat belt; it is going to be a bumpy decade.

And I don’t want to miss one minute of it.

Dad has always been an optimistic and happy man.  So, he forgets the bad stuff, which is great for him and us.

Except when it comes to filling out forms about medical history.  And Dad needed to complete one as part of his Life Alert system service.  So, voila, instant family activity helping Dad recreate his past and present issues.  Some families go to museums for outings; we go over past illnesses, trials and tribulations.  Usually, right before a meal.

Sidebar:  For the record, today we went to a museum en famille.

Last Sunday, right before dinner, Dr. SOB (with SOS as her helper) did what she does “at the office”; she took a patient’s medical history.  This time it was Dad’s.  (Actually, she keeps a detailed one on each of us, but it was a good memory exercise for Dad.)  SOB helped SOS pronounce the words, like “emphysema,” etc.  Dad responded with the answers.  Then we corrected him on relevant issues.

But sometimes he didn’t hear that well.  SOS said “neurological” and Dad asked “urological?”  (I guess he does know his issues.)  In the middle of the recitation of possible respiratory ailments, I interjected, “hard of hearing?”  Even though I was on the other side of the room, Dad turned and said, “No, dear,” with a watch-yourself look.  Then, SOS was asking about skin ailments, and Dad (for whom none of these words is new) needed SOS and SOB to repeat them a few times.  So, I interjected, “hard of hearing?”  Dad shot me another look.  Ok, I don’t know when to stop.

The medical history was more arduous because my Dad was having trouble hearing or understanding.  So, from even farther away from him, I interjected, “some wine, anyone?”  “Yes, please,” Dad quickly responded.

He isn’t really hard of hearing.  Sometimes, he is practically deaf.  But, mostly, he is just tired of listening.

Life Alert.  Remember when the company roared onto the home health care scene with the commercial about an old woman on the ground and yelling in a very nasal grandma voice, “I’ve fallen and I can’t get up”?

That commercial went viral — as much as it could in the 1980s before YouTube.  The Company went so far as to copyright that line.  Today their commercials are more respectable and less kitschy.  Still, they are morbidly amusing until you have to send away for information on the product.

In order to keep Dad in his home on his own, we needed to get Dad the life alert system.   Because we absolutely want him to have a hands-free intercom into which he can yell if HE has fallen and can’t get up.

Life Alert still has its quirks.  One of the selling points for the product is that there is a total refund if the person dies within 3 years of signing-up for the service.  No questions asked. Other than maybe, “may we see the death certificate?”  So, actually, at least one question asked.

Sounds like a stupid business model, since people who get Life Alert are not in the best of shape when signing-up for the service.  What will that person need with the money?  The person is DEAD.  Maybe the company banks on the fact that no one will remember about the money-back guarantee.  I guess it is a shrewd calculation about the probability of dementia afflicting the survivors rather than the probability of an aged, infirm person surviving another three years.

I went to Dad’s house today to have lunch and to try to reintroduce him to the Internet.  About once a month, we try this.  He doesn’t type well, so he is unlikely to send an email.  He can’t get the hang of the left click/right click, one-click/two-click protocols even though he was previously able to navigate them.

We spent an hour practicing getting in and out of Google, getting in and out of email, etc.  He would set up the email and I would type for him.  Then he would click send a few extra times.  We sent (mostly unintentionally) multiple emails to SOB and BOB.  They responded.  Uh oh.  Now what?  “Dad, do you remember which is the reply icon?”  He nodded.  “Great, now click.”  “Dad, click once.  ONCE.  only ONCE.  Ok Ok ok ok ok ok ok. Let me get us back to the right screen.”  And so it went.

SOB emailed me, “I am plunking down a cool million that by tomorrow he will be blaming something about the computer that is not allowing him to send or pick up his emails.”  So, I called Dad and said, “remember to try again a few times tonight to make sure you have the email and Google thing down.”  Either he will declare defeat tonight (and then I win the bet) or he will make it work and not try again until Monday (in which case I win the bet).  Insider information.   SOB uses her powers for good.  Me, not so much.

Time for a nap.  Tomorrow, POB, SOS and I are taking Dad to the Met to look at the new American Wing.  More bloggable moments.