Too many questions; no legitimate psychiatric analysis.

Except the one theory, which resonates for me:  that, as head of state, he is woefully ill-prepared to lead and dangerously disinterested in learning how to do so.  And lazy, to boot.

Personally, the bright spot in all of this is that the veneer of him as a populist president is cracking, even among his supporters.

[SIDEBAR:  Different parties can have control and implement their policies, as long as they are based on reason, research and love of country above party.]

This has given me hope now.  But not when I needed it last February.

When Dad died, I looked for hope.  Dad was such an optimistic person.  He came from nothing to rise in the tide of the American Dream.  It was not an easy rise.  Not for him and not for his brothers.  They fought in the wars — the ones that meant something and those that didn’t.  But he had an optimism that every day could bring something new and wonderful.

So, I looked for reasons to be optimistic after he died, to balance the grieving.

And I found nothing in the national conversation, nothing in the political rhetoric, nothing in the day-to-day anti-immigrant, anti-religious, anti-persons of color, anti-LGBTQI — just “anti” — incidents in our streets and in our communities.  His seeming iron grip over a volatile voter constituency darkened my everyday.

But even despair inevitably gives way to hope because despair is so very exhausting.

And the current open conversation about this potential evil despot being unfit gives me hope.

Because tyrants must fall if we are to be the democracy of our forefathers’ dreams.

And, they are my dreams, too.

Rest in peace, Dad.  Your youngest child was wounded but recovered and is battle-ready.

Here are some rantings.  A little too much for one blog, but this has been long simmering…

The 2016 election seemed to reveal the inhumanity of our fellow citizens.

Narcissism, racism, selfishness, and just plain meanness, won by a landslide.  And a mentally unstable, know-nothing, racist, xenophobic man with a history of sexual assault and fraudulent business deals became our commander-in-chief.

This was not America.

And then I learned, from people I admire and respect, that day-to-day life — as viewed on November 9, 2016 — would not be so different for far too many people when Agent Orange was sworn in.

We were, of course, united by the existential threat that the Mango Mussolini would get us blown up by nukes or cause our economy to melt down because of unbridled greed and abject stupidity.

This is not America (but it is).

While I was tortured and devastated, I thought that my life — even as a white, liberal, Jewish lesbian — that would not change, as long as I lived out Trumpism in New York City.

But the vitriol and the hatred unnerved me.  And the hate crimes surged here.

And I felt powerless.

And then my perception of reality did change.

I would love to say that I resist and march for others.  But that is not true.

I fight for my life, my beliefs and my family legacy.  I own this fight.  And every win is a triumph — if a racist cop is imprisoned, a Trump associate is indicted, a government subsidy to the wealthy is revealed, or a judge smacks down Administration for its Muslim travel bans. Maybe that makes it more real for my compatriots when they look at this middle-age, well-to-do white woman.

And standing up is itself a gift.  The Sunday after Rosh HaShanah, there was the Muslim American Day parade.  There were about seven of us who went to hold up the sign: 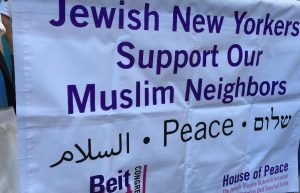 We were greeted with such love and joy.  I was the one crying from gratitude.  And then we were asked to march in the parade.

So seven New York Jews marched in a parade alongside Muslim Americans whose heritages spanned the globe.

Everything in my life brought me to that day — my immigrant grandparents, my striver parents who didn’t speak English until first grade, who became upper middle class professionals, through public school education and the GI bill.

And then, daily indignities of having Trump as president, backed by the political sewage that is the GOP leadership, gave rise to a “I am too tired to be silent” rage.  And then came the tidal wave that was the culmination of each act of love, patriotism and resistance:

“Me, too” meme that has felled so many (except for the Groper-in-Chief).

The teetering campaign of Roy Moore, the poster child of ‘America Gone Psycho.”

The clear inability (thank G-d) of the GOP to govern.

The people associated with Trump getting indicted.

People realizing that taco stands on every corner is an awesome concept.

The realization that the children of those who are running the stands are the future of American.  Just like my grandfather with his apple stand.

And then hope came this off-year Election Day.  Democracy could carry the day.  If we stay vigilant and take nothing for granted.  And if we believe that we are all created equal and with inalienable rights to life and prosperity.  Maybe not happiness, but maybe safety in our homes and on our streets from robbers, thieves and agents of local, state and federal government.

And one more wish?

Let that same damn landslide bring them down. (oh, for all the Neo-Nazis and White Supremacists, thanks for taking off your hoods.  Now we know where to find you.)

And let’s take a moment to remember:

Because when next our nation sings Hallelujah it will be because we stood up. #ImStillWithHer

From what I read — how can one avoid it — the details of Chelsea’s wedding were better kept secrets than, say, our troop deployments in Afghanistan (thanks, WikiLeaks).

Good for them. It was Chelsea’s wedding and not a media event.  The Clintons, who have a love-hate obsession with media, kept it real.

Chelsea was the star of the show (and NOT Bill or Hillary).

I, for one, am glad not to know all the details.  I am neither family nor friend AND I don’t care what the bride wore or who was/was not invited.

I do wish Chelsea and her husband much happiness and joy in their lives together, as I would wish any newlyweds (whether or not the union is recognized by the laws of the several states).

But, Bill, really, don’t you feel a tinch bad about the Defense of Marriage Act?

Poor Hillary Clinton.  She has been pilloried, humiliated, beaten by a young upstart from Illinois and then charged with heading one of the most dysfunctional and unmanageable departments of the Executive Branch — the Department of State.

Two things you can say about Hillary is that she is a hard worker and persistent in seeking the goals she sets.

But, it seems to be catching up with her.  She really looked tired as she sat behind President Obama in the Security Council meeting today.

It is amazing how well rested everyone in the Bush Administration looked.  Well, maybe not so amazing given the little they did to clean up their messes.

I am glad that the members of the Obama Administration look tired.  There is a lot going on.  I am impressed with the intensity of President Obama’s schedule these past two weeks.  George Bush would need two months — and a month in between to relax in Crawford, TX.

So, Hillary, I am sorry that you look tired and in need of a break.  But I am grateful that you are tired.