So, my dear and long-time friend, who is experienced in estate matters, came over to Dad’s house to help me assess how to clean out everything.

As gently as she could, she told me that there was very little there of any intrinsic value.  Maybe the silver.  The rest would essentially cost money to remove.

Of course it was true.  But it was hard to hear.  My parents’ possessions are just like the detritus of any other people’s lives, and often laid bare in garage sales.

But these were not any people.  These were my parents.

And these were not just any possessions.  They cluttered a home and carry all of the appurtenant emotional value — and baggage — of more than 50 years.

And some, like PanAm playing cards from our 1969 family trip to Europe, are — to us — priceless. 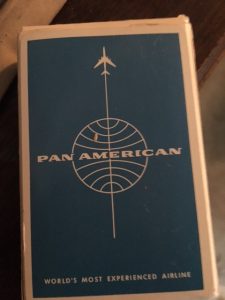 Other than masterpieces of art (which themselves gain and lose value according to prevailing tastes), I guess things only have the value you give them.

And, when you are gone, they are only as valuable as the good memories they evoke.

Later in the day we took the client to a basketball game.  There is nothing non-vegan about popcorn, french fries, onion rings, beer, pretzels and peanuts.  Being vegan CAN BE awesome.  Imagine being able to say the following: “Sweetie, I had to eat the fries and rings and roasted peanuts, because there was nothing else.  What could I do?”

But everyone grabbed all the food I had and left me alone, waiting for some miscellaneous things, like wine and mixed drinks that were ordered. And, I was starving.

I proceeded to order a decidedly, and possibly offensively, un-vegan hot dog and scarfed it down so no one would see. Immediately, I felt terrible about what I had done.  Here I was stuffing sausage derived from mystery meat of inhumanely killed animals and we were entertaining someone who has a conscience.

Then I was sure Karma would boomerang and I would be the Lucille Ball character in a “Here’s Lucy” episode where she was at a gallery opening and she started breaking out in hives.  Lucy excused herself.  Then the spotlights turn on, a curtain is pulled back and there is Lucy behind the prized sculpture, scratching her hives and looking like a deer caught in headlights.

Karma IS a boomerang.