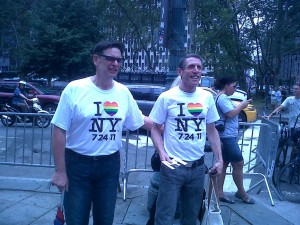 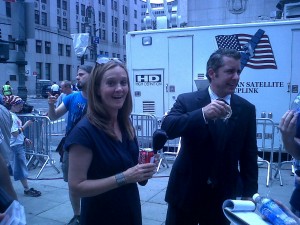 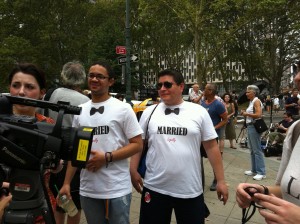 It was overcast.  It was pedestrian.  It was a long line on Worth Street.  I bet a few wondered if they could get their driver’s licenses renewed while they waited.  It was spectacular.  It was thrilling.

It was a jumble of emotions.

It was, except for the lines (and that it was a Sunday),  so unremarkable in its normality, that I wanted to cry for joy.  Yet a whole community celebrated standing in line for a marriage license — something that everyone else, until now, took for granted and, frankly, groused about.  Young and old, of every nationality and race, same sex couples stood on that line.  Four couples with whom we are especially close took their vows yesterday.  We couldn’t find them.  G-d bless texting and emails because we all knew we were there somewhere standing as witnesses.

Even Samantha Bee and Jason Jones from the Daily Show were on hand to mock the events.  That is how you know you have arrived.

Some sang and danced around and under the rainbow chupah (wedding canopy) [see above shot, looking up].

There was a lone protester.  He said terrible things that TLP (our son, the little prince) asked about.  TLP also asked why I said, “Shame on you!!” to the protester.  I told him that the protester used bad words and is spewing hate in the name of Jesus who was a man of love.  “Well, E-Mom, maybe it is because you and Mommy won’t be married until June.”

G-d bless TLP.  He thinks the problem is that we are living in sin.  But all will be ok once we get married in June.  In fact, he told some people on the subway who got married, “don’t worry, WE are getting married in June!!!”  Yep, the whole family.