Take anti-nausea pills before reading.  It is a little like being a castaway at sea.

Dad came home yesterday afternoon.  He was relieved to be home.  There is an amazing “muscle memory” about being home.  He knew how to motor around the house to find the things he wanted even though he was wobbly on his feet and could not put the words together to talk to us.  Also, we ordered a wheelchair, a walker and a cane because we didn’t know his needs.

Shortly after he got home, he wanted very much to call the United Jewish Appeal but the reason made no sense.  And it was the Sabbath.  His frustration was rising and logic wasn’t working.  So I dialed POB’s cell and I said (actually, I was desperately directing her), “Dad needs to speak to the UJA, so pretend.”  I passed the phone to Dad, and turned up the volume so SOB and I could hear.  “Hello, Mr. [DOB], this is “Rachel” from the UJA.  Thank you for your pledge . . . .”  She went on until Dad said, “ok, thank you very much.” Dad was satisfied and almost looked as if he would nap . . .  Nah, no luck.

Sidebar:  POB should be nominated for an Academy Award, since she performed while on a crowded bus with SOS, who was quite confused.  (She told him that we were testing his phone skills and SOS loved the cloak and dagger of it.)

SOS was scared to see Grandpa injured.  We were all scared of the future.  BOB was busy cleaning out all of his junk mail and organizing recent files.  Man on a mission. We all found ways to soothe our individual terror at our new reality.

When SOS, POB and HOSOB arrived, we all gathered around and went through recent pictures to jog his memory.  SOB and I had previously gone out shopping and HOSOB brought some liquid relaxation (wine).  By this point, it was “cocktails and hors d’oeuvres” hour because that is the way one does things in Dad’s house.  Since he wasn’t so steady on his feet, we pretended to give him a “scotch” but it was club soda.  The upside of a little dementia — he thought it was scotch.

Cousin Gentle arrived later on.  By the time we ate dinner, he knew that he was surrounded by family, and very happily so, but only remembered the names of the eldest, Cousin Gentle, and the youngest, SOS.  Also, his evening attendant ate with us, so we could weave her into the fabric of the day (and she is lovely in any event).  BOB stayed until today, so at around 9:30, the rest could leave for much deserved rest.

Sidebar:  At this stage, rest is elusive.  Sleep is a non-starter.

The night was long and difficult according to BOB. And BOB looked like he hadn’t slept.

By morning, Dad was better, but still inconsistent in strength, gait and comprehension.  Dad was using the walker and BOB was playing in the wheelchair.  BOB challenged Dad to a race.  It was actually very funny to watch them go back and forth.  A little insanity amid pervasive insanity is very healing.  And it demonstrated that Dad’s personality is intact.  It is his memory that needs work.

He started to nod off after lunch and had a long nap. SOB and I went out to get supplies and some fresh air because we were either trying to keep Dad engaged or listen for any sign of a problem while he slept.  We saw this in the drug store and thought it captured our feelings — we just wanted to SCREAM out of fear, frustration, lack of control, uncertainty of the future, you name it: 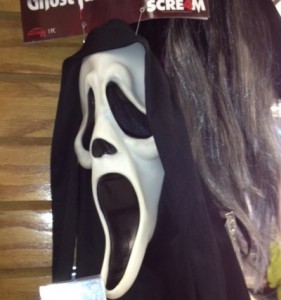 He woke up able to walk without any support but the real proof that Dad was Phoenix rising was that he did not go for the fake scotch at cocktail hour.  I had to put a little scotch in the club soda so there was a faint smell of liquor.  Dad was still not happy but mollified somewhat.

POB and SOS came over for a surprise visit at dinner because SOS wanted to see Grandpa and he was sad that SOB and I might be lonely and scared “alone” with Dad.

Sidebar:  I can take no credit for the soulfulness, generosity and sense of family that is in my son’s heart.  POB is responsible.

POB was talking to Dad and he had some good recall of random things.  And, he was even grousing about the fake cocktail.  I overheard this, and I said, “Dad, you have to earn that cocktail!!  Get strong, get steady, get your memory back!!”  Everyone laughed.  My father saluted me.  He knows his kids are his bosses — his essential personality shining through.

It was time for him to go to sleep. The attendant was going to help him wash up.

I kissed him and said, “Goodnight, Daddy, I love you.”

“Goodnight, my darling, I love you.”