About ten days ago, NYCFOB (New York college friend of blogger) asked if any of her friends wanted to go with her to get a rock climbing belaying certification.  I thought, I haven’t seen my dear NYCFOB in a while (which is ridiculous because we live within 10 blocks of each other) and this would be a great activity.  And I remember belaying SOS (my son, source of sanity) when he used to rock climb in the Field House at Chelsea Piers. But NYCFOB and I were getting our certification at the BIG wall in the Chelsea Piers Fitness Club.  Yikes.

NYCFOB and I have been friends for 30 years.  We have a bond that is tried and true and secure, no matter that we don’t see each other on a daily, or monthly basis.  If she needed something I would be there and vice versa.  So, going into this I was relaxed.  But, I think NYCFOB decided to do this on a whim and didn’t know what it entailed.  I had a sense, but it had been a while since I had to do this.

Our instructor, Matt, who was 12 years-old with some tattoos and various ornamental body piercings, taught us to tie the Knots of Death, and handle the ropes, etc.   I call them the Knots of Death because if you, as climber, don’t tie them right and the belayer doesn’t recognize that the knots are not correct, there is nothing but a free fall awaiting you.

WHAAAAAT??  One of us is climbing and the other is belaying??

Isn’t that what we paid the instructor to do?  We would belay him and he would belay us?  We have to belay each other after a brief instruction?

NYCFOB was the first on the rocks.  The secret about belaying is that not only do you protect the climber but you can also help the climber by pulling on the rope to get him an extra boost to the next “handle” on the wall.   But you have to be careful about giving the climber rope burns in the sensitive areas where harness grabs the flesh (yeah, you can let out an “OUCH!!” right about now).  No one believes that you are helping if you give someone a wedgie (or worse).  That is just the unsung role of the belayer.

Anyway, NYCFOB was right to fear that I didn’t have the skill level.  And, understandably NYCFOB was stressed while she was waiting at the top while Matt was just then teaching me about how to let her down slowly.  She did say, “get me down, now!” or something to that effect. She didn’t know that all was going to be ok because I had already threatened Matt, “if you let me let my friend of 30 years fall off those rocks, first I am going to kill you, then, I am going to call two ambulances.  Are we clear?”  He seemed surprised and then I was surprised that no one had threatened him in this way before.  How can that be?  Maybe there aren’t too many Jewish mothers rock climbing.  But, really, isn’t this just more evidence that the flush sound you hear is our civilization rounding the drain?

Then it was NYCFOB’s turn to belay me.  Note the ever so attractive butt shot.  That bag on my butt is the chalk bag to help grip the wall and not some bizarro thong thing strafing my tooshie. 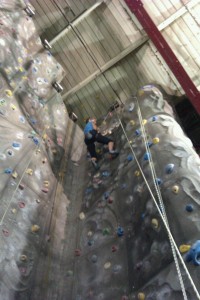 When NYCFOB was learning how to bring me down gently, I remembered that I was afraid of heights.  I started to break out into a cold sweat and get all weak.  In a moment of self-preservation, I started to stare at the wall and hoped that I would start being lowered.  Matt yelled, “let go of the wall!!”

Really?  Let gooooo of the wall???

In that split second, I realized that I was current on my life insurance and that we were close enough to the High Holy Days that this was a test of my mortal future.  I left go of the wall.  (Nah, not really.  I scraped my fingers against the wall, but the bonus was that I also got a complimentary nail filing.) Then, Matt decided that we take turns belaying him and he would “fall” a few times to give us practice in stressful situations.

Wait.  You are giving us practice AFTER we took turns holding the lives of our friends in our hands?

Are you a moron, Matt?

Ok, so we take turns doing that.  The class was over and, although I think we both thought about having a bite together and catching up, we were too physically, mentally and emotionally exhausted.  I just dropped NYCFOB on the cab home. Today, I saw NYCFOB for a mini-reunion with other college friends.  I asked about the next belaying class in a way that suggested I was up for it and yet really scared by the prospect.  “I’ll look at the schedule and get back to you,” was NYCFOB’s answer. Phewww.