I know you will never read this.  And, why would you, since you are feeling the sting of the election more than anyone.

Pundits will analyze the reasons you didn’t hit 270 but all that is bullshit.

The excesses of Wall Street that brought our nation to its knees was short-lived by those who caused it; those who suffered the job and home losses, coupled with outsourcing, etc., never recovered.  And then, a Black family — who truly embodies all that makes America great — successfully inhabited the White House and got done what they could with a recalcitrant Congress. And, let’s be honest, they did it better than any white family could have ever navigated the shit that hit January 2009 to January 2017.

And that made the racist and those fearing the end of white privilege foam at the mouth.

Not understanding that view, I didn’t even count it in the election calculus.  (Many of my friends knew better.)

Together with those who were left behind in the financial recovery, the DEPLORABLES voted in that creature.  So, they effectively bombed our system.  People who wanted to stick it to Washington and didn’t care about the outcome.

(And the Democrats were contemplating their navels instead of creating an intractable blue wall.  You ran a fine campaign and won the popular vote.  Bernie would have been buried under the scrutiny of a prime time election.  A socialist and a lifelong politician and he was different? Are ya kidding me?)

So, they excused the inexcusable.  And with the help of the Russians and FBI, gas-lighted the country about your emails.  Let’s just say it — the State Department system was not secure enough for the sensitive emails you needed to send.  You served your country by not saying that in your testimony.

So, a woman, who also embodies all that makes America great and has served her country, was denied the White House.

No, you are not perfect. (You shouldn’t have ever had to be. ) No one is; certainly NOT POTUS45.

I am still inconsolable.  I had 300 wristbands made that say “WE ARE STRONGER TOGETHER” and inside, “Love Trumps Hate”.  (I hand them out.) 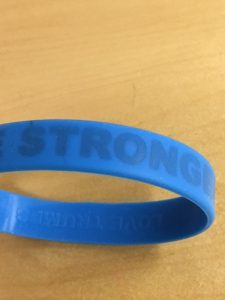 I stopped watching the pundits.  I stopped looking on social media.  I stopped believing the press.

Then the dreaded moment happened.  He was sworn in.  And I couldn’t even watch you walking in (ok, I saw a snippet and cried and stopped watching).  Grace under fire.

But the marches changed everything.  Because we are uniting.  I am ready to fight.

The DC march should have been in your honor.  Because we are all galvanized and united in action because the person who should have been POTUS45 had to watch as this buffoon, this humiliating caricature of the worst of America, took the oath of office.

Hillary, you didn’t win the electoral college, but you won the popular vote and started a revolution.

Maybe, in the long lens of history, you will have done more for us by not ascending to the Presidency.  We will never know.  But, I, for one, am committed to making your vision a reality.  (Although, seriously, do I have to call it a pussy hat in front of my teenage son???)

I predict that the history books read, “Hillary Clinton was the first woman elected President.  She was not sworn in.  Instead, she sparked a revolution that created the change she envisioned implementing as president — equal treatment and equal justice under the law; social and economic equality; compassion for all our citizens and immigrants; and a nuclear-safe world.  She is considered a great stateswoman and a hero of the 21st century.”

On Saturday, I marched with my family and friends. My sister and I carried pictures of our mother and grandmother with us at the march, and we wore your campaign buttons.