Picking up from the prior blog entry:

SOB and I park the car and go to AROB’s house.  Our cousin and his wife are already packing things up.  This is a hoarder’s home.  Don’t look too closely. 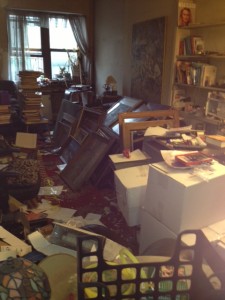 We box up anything and everything of value — sentimental or otherwise.  We load into the BIG F’ING rental car and we all drive down to the storage place.

SIDEBAR:  Did we ever determine whether I needed a trucker’s license and a tattoo?

We arrive at the storage place. I had two emails from Alan Dumpit, my reservation number and the memories of two inane conversations to poison my mood as soon as the guy behind the counter welcomed us, and wanted to understand our storage needs.

“I told this all to Alan Dumpit!”

“Why are you not smiling at me? [I was not!!]  This is all good.  Alan isn’t here and I want to welcome you and make sure you are getting what you want.”

“I want a storage room big enough to store a one bedroom apartment equivalent of stuff.”  [Of course, if we were talking about all the stuff crammed into that apartment, then I would need a McMansion sized locker.]

“Who is renting the storage space?”

OMG.  SOB [sister of blogger] doesn’t understand why I am foaming at the mouth.  She doesn’t know the whole back story.  [Until she read it last night in the last blog entry.]

“So, I should be talking to your cousin,” and, as he turns, I realize my poor cousin is a sitting duck, “Let’s discuss what your needs are . . . .”

After I watch my cousin endure the “creation of the storage relationship” phase for 30 minutes, I take pity and I interpose my credit card between the men and offer to move on to the paying ceremony. 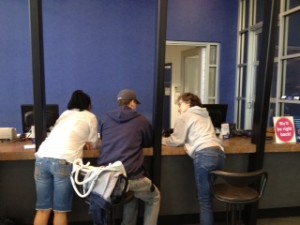 Oh no no no no.  We had not begun the ceremonial paper signing phase of the new relationship.  That required two storage consultants to get the papers and involved initialing obscure provisions everywhere in the documents.  My cousin and I were not exactly robo-signing; I think we were more probably coma-signing. I was waiting for incense, holy water and Aaron’s priestly blessing.

And, of course it was a very, very special day because, we were told, it was the grand opening of the 9th floor of the building.  Still, no discount; instead, overpoweringly toxic paint smells and near-deafening drilling noise.

Finally, we were all initiated into the storage community, complete with the ceremonial handing over of the dead bolt.  I was, in fact, a little disappointed about the absence of incense, holy water and Aaron’s priestly blessing (especially since the latter is in this week’s Torah portion).

We ran to claim the dollies to haul the stuff. Or, rather, we ran FROM the storage consultants.  We unloaded the behemoth of a car and did a quite respectful send-up to Four Stooges and The Marx Brothers, as we dropped boxes, scraped the newly painted walls and drew a little blood from each of us.  The race to the elevators from different aisles was kind of fun, too.

Finally, we, the FAB FOUR put AROB’s [Aunt R’s] valuables and effects in a safe (if toxic) place and closed that dead bolt, baby.  (SOB, photographer.)

Relief and laughter broke out as we got back into the BIG CAR, and I asked, “any other justice need dispensing? We have the car until tomorrow!”

SIDEBAR:  But first, after this day, we needed some wine and hors d’oeuvres.

And I think for SOB and me, through this excruciating process, we have accepted that AROB had flaws that recalibrate our views of her present but don’t tarnish our visions of her as a hero of our youth.  I know I have gone from harshly judgmental to willing to allow that there may facts I will never know that may be kinder to her choices.