Meanwhile, Uncle L looked slovenly despite his well-heeled paramour and family.  Just take a look at his coat:  No wonder his paramour thought we were wolves.  A generation from the ghettos of Europe, born in the country, and still.  But he is a Yankees fan, so some things are forgiven. 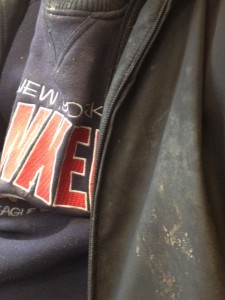 Ok, so we started the Seder.  As commanded, we go through our “emblems of festive rejoicing” which are the symbols of Passover:  rebirth, renewal, bitterness of slavery and the sweetness of freedom, and the remembrance of the night of death in Egypt that led to the Exodus.  But wait, there’s more.

In our family, we have our own symbols of festive rejoicing, requiring a second Seder plate.  First, G-d didn’t deliver us from Egypt, then the pogroms of Europe, then the Holocaust, then to two generations of prosperity in the United States for us to drink that gross Manischevitz wine.  So, we have a “Manischevitz Free Zone” in our house, where there is (reasonably) good Kosher wine and some good other wine.  Second, courtesy of HOSOB (we love him so), we have a Moses action figure (which was a bonus with any Nintendo purchase) that has detachable staff and Ten Commandments for the requisite slamming at the sight of the Golden Calf.  Third, have a watch to symbolize the ONE hour that SOB allows for the ceremony before she takes away the Haggadot and announces the first course will be served. In a nod to the modern age, SOB flashes her iPhone timer, so I know exactly, to the nanosecond, how much time I have left. 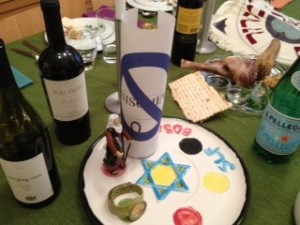 Finally (not pictured here), we have a brisket and not a turkey, because G-d didn’t work miracles and deliver us from five millennia of trials and tribulations so that we would have to eat dry turkey.  No, G-d delivered us so that we could enjoy a nice, juicy, marbled brisket with just the right amount of fat to make it tasty and moist.  (Unless you are vegan or vegetarian, in which case we had a delicious Mediterranean bean dish.)  That is my interpretation of the wisdom of the ages.  You can have yours, just not in my house. 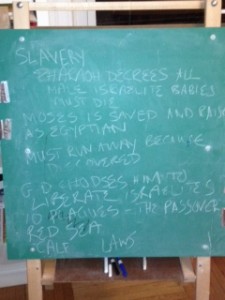 Sidebar:  GDJOB, who had never cracked the spine of the Bible, was at a loss until her spouse GDKOB showed up.  GDKOB was in charge of preparing for Seder.  Unfortunately, she was a little late for the debate but her righteous person was discussed.  They brought dessert, so all was forgiven.

There was a catch:  what is the definition of righteous?  Depending on our definitions, we had different answers.  There was a second catch:  there is no right answer, except that we can agree that among the wrong answers are: (i) Pharaoh and (ii) the Edward G. Robinson’s character in Cecil B. DeMille’s, “The Ten Commandments” (did he chew on a cigar or is that just my imagination?).

We came up with four righteous people (with our varying definitions of righteousness):

My choice? Pharaoh’s daughter.  Who has no name, except in Chronicles, the Koran and the writings of Josephus.  In the Hebrew Bible, she is known only by her relationship to a man, Seti I, who decreed that male babies of the Israelites must die.  She defied her father’s decree and saved a life and raised Moses as her son.  She stepped outside her rarefied, privileged world and extended her hand to a slave child.  Because a child is a child.  Because a life is a life.  And she risked everything, maybe for the knowledge that she was doing the right thing and her heart and soul would not be sullied by the death of a child.

And she was exiled when later it was found out that Moses, her son, was an Israelite.

Bithia.  A person to be remembered as a human who saved a life of a baby who would grow up to liberate a people.

Bithia was her name.  And at Passover, I remember Bithia.  Because she is the person I most admire in this story.