Yesterday, POB, SOS and I joined a group of well-heeled, mulit-cultural (I might add) Upper West Siders on a bus to West Philadelphia to get out the vote for Obama.

We arrived at an Obama field office. 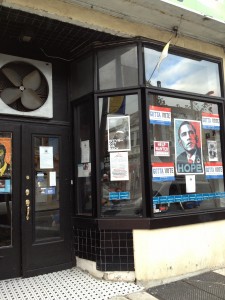 We were given clipboards with lists of voters who hadn’t voted in 2010.  We had to knock on doors to make sure that these citizens knew that their vote was important, what they needed for proper ID (and that the Pennsylvania voter suppression law was struck down) and the location of their polling booths. 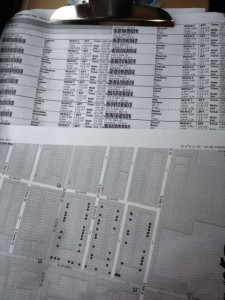 POB and I were given names on opposite side of the street.  SOS tagged along with one of us.  People were so welcoming and glad we were out in the cold making sure that they knew where to vote.  Many people weren’t at home; the people who answered the doors said they were at work.

West Philly is not exactly the cushy part of town.  It was working class until the Great Recession.  Now, parts are boarded up. 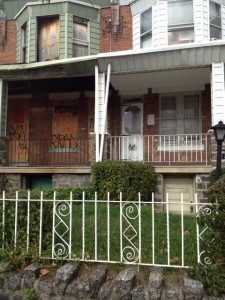 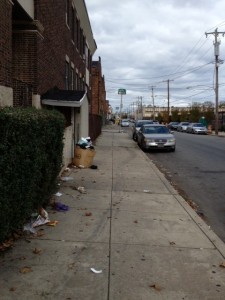 High unemployment.  Crime skyrocketing.  See the sign in the pizza place below. 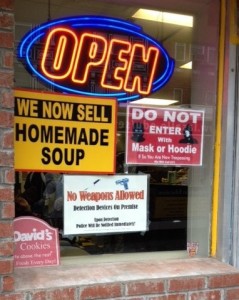 When I was in there buying a pizza, someone came in with a hoodie, and the cashier said, “take off your hoodie, or I am calling the police.”  The management is serious about the hoodie thing.

It seemed (to my white, upper middle class, eye) that many needed a reminder that their vote counts.  Certainly, with all the attempts at voter suppression, a person could give up hope.  But, more than anyone else, their lives are literally on the line — the poverty line — depending on the outcome on Tuesday.

Some places were scary and creepy.  SOS was a little unnerved by these places.  Especially, a young boy who was outside with no one minding him.  (Yes, sweetie, I thought, please think about this when you re-enter your rarefied world.)

Among the three of us, we knocked on 120 doors and got some very enthusiastic responses (once they realized we weren’t canvassing for Romney).

POB, SOS and I talked about our adventure over dinner tonight.  I tried to make the point to SOS that his great-grandparents were the working (or sometimes not working) poor who lived and raised their children in tenements and then, later on, in nicer places.  But his grandparents had a great public school system and there were jobs for them when they graduated.  And that I am one generation removed from this neighborhood.  And Grandpa got mixed up with a gang before his brothers intervened (and then beat the crap out of him).

I don’t know if he understood the importance of what we did, as citizens of this country, and as a way to pay forward our family’s good fortune and opportunity by re-electing President Obama.  I believe this.  And I always will.