Last night I was at the gym, in my usual (and clean), well-worn yet dorky gym attire, when I came upon the Sniffer at the water fountain.

As you may recall, the Sniffer (http://40andoverblog.com/?p=3247) feigned an allergy to perfumes so that he could come over to where SOB and I were companionably and half-heartedly “working out” (read, “chatting”) on side-by-side elliptical machines.  He sniffed and sniffed around us and then said, “I knew by looking at you that you weren’t the type to wear perfume. . . . ” And then he took the elliptical machine next to mine.  I think that line would turn off straight girls much less an almost-married lesbian.

The Sniffer has since tried to make conversation with me about various, incredibly odd, things.  I now think that he is socially inept and just wants to chat the way others do at the gym.  I started to feel bad for him, until . . . .

Back to the water fountain.  Sniffer half-turns to me and says in that loud voice that suggests he doesn’t know how to modulate volume:

“I almost didn’t recognize you without your “Friendships are Recession-Proof” t-shirt.  Do you have just one or is the recession over?” 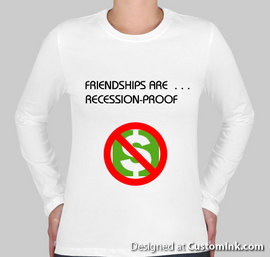 Of course, I have to tell him in an equally loud voice that I had them made for my friends and they were popular enough that I had to do a second “printing” and ended up with six or so EXTRA of them.

“And they are always clean!” I bellow in a last exhausted gasp.

Ok, I had to walk away.  His disquisition on economic markers (which I had overheard before) is mundane yet pedantic, jargon-y yet shallow, almost exquisitely so.

I met POB for dinner after the gym.  “How was your day?” she asked.  “I need new gym clothes,” was my response.