Passover looms large in POB’s and my life.

In our house, Passover is all about MOPOB.  Why?

Passover was MOPOB’s self-designated proving ground as a Jew by choice.  I remember the Seder I attended at MOPOB’s house.  MOPOB was stressed, as if the bubbes (grandmothers) of 100 generations of Jews were looking down at her wondering if she was using the right amount of chicken fat in the matzo balls.  That kitchen was way too crowded with all those mavens; a lesser person than MOPOB would have made a run for it.

In 2006, POB and I started having Seder for both of our families.  POB was desperate to have those matzo balls float (MOPOB’s receipe; and they did).  We had a rigorous discussion (MOPOB’s form of exercise) about an aspect of the Exodus story.  Then we all ate POB’s delicious meal together with family and friends.  MOPOB pronounced herself satisfied with POB’s and my hard work and how we melded two families’ traditions.  And shortly thereafter, she died.

Sidebar:  So, really, really, MOPOB, with that as a backdrop, how could Seder NOT be about you?

MOB didn’t really like all the prayers and stuff, but she loved having people around her table eating and talking and eating and having meaningful interaction (no idle chit chat at the Seder table).  And anything that tripped off MOB’s children’s tongues were quite possibly the most brilliant ideas theretofore uttered in the history of humanity.  So, it was all good.  For MOB, the most important thing was that, regardless of how everyone came to the table, everyone left that table as family, hugging and kissing (and there were no outrageous failures of tradition that would be shondahs for (i.e., embarrass us in front of) the neighbors).

Over the years, POB and I have gotten comfortable with our mothers’ looming large on this holiday.  The kitchen, though, gets crowded, especially when POB is making the traditional foods.  Her mother’s spirit hovers and my mother’s takes a magazine and sits at the counter and reads, ready to pitch in, but not really ever knowing her way around even her own kitchen (this for another blog).

Sidebar:  If truth be told, age earns our quirkiness or idiosyncrazies (no misspelling here) the more refined term, “eccentric”.

I had arranged to pick up an extra table from DOB’s house. on Friday  He also bought some wine for us.

Sidebar:  Dad buys wine that is, well, barely usable for cooking.  But it was such a good price that he couldn’t resist.  “And who can tell the difference?” he asks rhetorically.  Dad, I am no connoisseur(se), but you buy rot gut wine.

Sidebar on sidebar:  FOPOB is no better.  He goes for the cheapest Kosher wine he can find.  One year, he told us not to buy wine because he was bringing wine.  He brought ONE bottle and he knew we were having nearly 20 people.  Are you kidding me?  Good thing I always buy non-kosher GOOD wine.  Clearly, we only serve DOB’s and FOPOB’s wine to someone on his or her fourth glass, because that person is too shiker (Yiddish, meaning drunk) to know the difference.

I arrived at DOB’s house around 1pm.  He decided that he will just come over early and hang out with us, while we are trying to put together a sit down dinner for 16.  Oh, goody.  But DOB is such a lovely guy and very lonely, so how could I not bring him along?  I called POB, who primed SOS to read books with Grandpa DOB.  Ok, they went through a survey of American history, and the origins of the Silk Road and it was only 2:30pm.  Time for reinforcements.  I called HOSOB, who is busy working on commissioned pieces of art.  But I know SOB was working hard at the hospital, so she couldn’t stop my asking HOSOB to drop the paint brush, shower and run over to our house to entertain the “boys.”  SOB might have stern words for me later for my having taken HOSOB away from his work, but that day it was better to ask for forgiveness than permission.

HOSOB, a fabulous member of the clan, came over and took over, leaving POB and me to our preparations.  At one point, DOB was tired and SOS needed a little more exercise so HOSOB took SOS for a walk.  (Some days, I think we really should have a treadmill . . . .)

Meanwhile GDJOB arrived with Kosher for Passover cakes (which were indeed FABULOUS).  As she walked in, she said, “I know you thought I was probably [DOB] . . . Ummmm [as she saw DOB seated]  Oh, hi, [DOB]!!”  Ah, yes, GDJOB, careful when you walk into our house, because as DOB gets older, his sense of appropriate arrival time can make you wonder whether he thought Passover was a lunch or dinner affair.  OOOOOOOOhhhh.  The first of many, many, uncomfortable moments chez nous.  Luckily, GDJOB had to park the car and run some errands.  She exited stage left, post-haste.  And we have a memory for the ages.

Sidebar:  Elders, children and the sandwich generation. Believers in one thing or another, non-believers and people just having a power nap before dinner.  There was one moment when I looked at my assembled family and remembered when they were the giants of my youth, when they were young and strong and idolized by my sister, my brother and me.  Wasn’t that yesterday?

“We will go, young and old; we will go, bored and snoozing; we will go, Jew, non-Jew and Atheists; we will go all together to observe the Passover ritual for we shall tell our children, on that day, G-d freed us from slavery, from the house of bondage.”

Pretty profound stuff.  That is until I noticed my 80+ year-old uncle was already napping and drooling, and FOPOB had taken the whole bowl of haroset and started eating out of it with his spoon. . . . 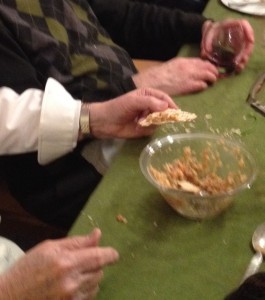 Also, there is a personal corollary theme:

We were not delivered from slavery to eat turkey and drink gross kosher wine.  We were liberated to eat a lovely marbled brisket cooked to perfection and delicious Cabernet that can stand up to a Yiddisha brisket.

We don’t follow the Haggadah religiously (as it were).  I like to make the Exodus story relevant to the modern day.  I pick the passages and copy the relevant pages so we can all read together and discuss.  I find portions of the story disturbing and don’t shy away from that.  There is a reason why Jews “tremble” before G-d.  The G-d of the Hebrew Bible is pretty violent and mercurial.  But we must observe the traditions, from generation to generation, even if one year, my theme was:  Saddam Hussein and G-d, compare and contrast.”  Yep, step away from the computer, lest a lightening bolt destroy you and your family.

Because of Arab Spring, SOS has become very interested in revolution and civil wars that inevitably follow.  So, in my preparation for the Seder, I read the Exodus story to find elements that spoke to heady days of freedom and the subsequent factionalism once the common enemy is vanquished.  There is a lot of turmoil following the Red Sea crossing.  The fluidity of the story is both a strength and a weakness — anyone can find something to support his or her thesis, whether for good or malevolence.

And of course, in addition to the usual “emblems of festive rejoicing,” we have our own:  (i) the Moses action figure (with detachable commandments for easy throwing); (ii) a watch symbolizing that we only have one hour before my sister takes the Haggadahs away and declares the ceremony at an end, and (iii) a bottle of the two-buck chuck my Dad will always bring and we will never, ever, drink.

We will fill in this second Seder plate as our tradition continues….

But for now, the matzo balls floated and that is indeed a blessing. 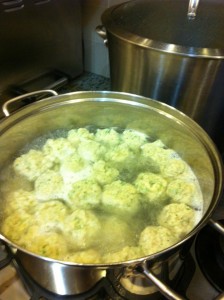 A zissin Pesach to all.